When leaders of the Findlay accounting firm Gilmore Jasion Mahler decided to establish a community event in their hometown, they went straight to the most in-the-know person in the city; the mayor, Lydia Mihalik.

We wanted to make sure that the fundraiser raised money for an organization that truly needed the assistance,” said Susan Ross Wells, marketing manager. 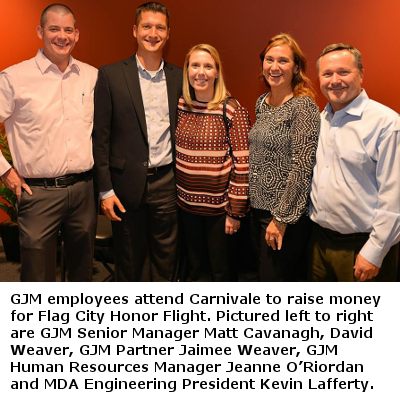 Among Mihalik’s suggestions: Flag City Honor Flight, an organization working to fly area veterans to Washington, D.C. to visit the war memorials built in their honor. Once a year, the nonprofit flies a plane full of veterans to D.C. for an all-expenses-paid daylong trip.

“Many of the veterans, due to physical or financial limitations, can’t make that trip on their own,” Ross Wells said. “When they get back, hundreds of people are waiting for them in the airplane hangar to say welcome home.”

GJM organized a fundraiser to support Flag City Honor Flight. Held this fall, “Carnavale” attracted hundreds of attendees and raised more than $42,000 from corporate sponsors, a silent auction, ticket sales and other donations. Organizing the event took an “all hands on deck” approach from GJM staff, according to Ross Wells.

“We were crossing our fingers and hoping that all was going to work out, but we were astounded with the final figure,” she said. “We never would have thought we could accomplish that for the first year of an event.”

The firm has always had a culture that encourages giving back.

We’ve been believers in community service since we went into business 20 years ago, when there were only 13 of us,” said Kevin Gilmore, CPA, managing partner. “We’ve grown to over a hundred people in two offices now. That’s a lot of helping hands.”

Thanks to the money raised at Carnavale, Flag City Honor Flight is adding a second flight in 2017, doubling the number of veterans that will make the trip next year. GJM employees plan to be there at the welcome home event honoring the veterans.

We’re going to be there with posters when they come home,” Ross Wells said. “We’ll be ready to show our support.”