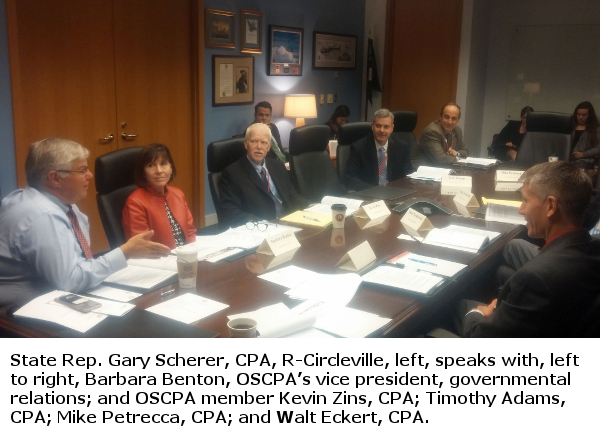 While there’s certainly room for improvement, there are many aspects of tax policy in Ohio where things are going well.

That was just one of the messages OSCPA members delivered Tuesday in Columbus at a meeting with Ohio House majority leaders.

The session was similar to last-month’s meeting between CPAs and Tax Commissioner Joe Testa. House Republican leaders requested the meeting to learn more about the CPA profession’s legislative priorities and concerns – not just for the lame duck session later this year and the 2017-18 session, but also looking even farther out.

“We truly appreciate Speaker Rosenberger’s invitation to meet with our member experts for a deep dive on key issues impacting the state of business in Ohio,” said Barbara Benton, OSCPA vice president of government relations. “Ohio CPAs and other business leaders should know that their elected officials truly are working hard to make our state an even better place to work and live.”

State Rep. and OSCPA member Gary Scherer, CPA, R-Circleville, said OSCPA’s opinion is valuable because of the impartiality and knowledge of its members.

“This organization is top of the pile in terms of influence,” he told the other six CPAs in attendance.

Among the things the group discussed was the need to maintain policies that are working, such as the Commercial Activity Tax (CAT), and to refrain from harmful changes such as applying Ohio sales tax to professional services.

As in last month’s meeting, the Task Force’s white paper, issued this past June by OSCPA, was a cornerstone of the conversation, and several members of the task force were in attendance.