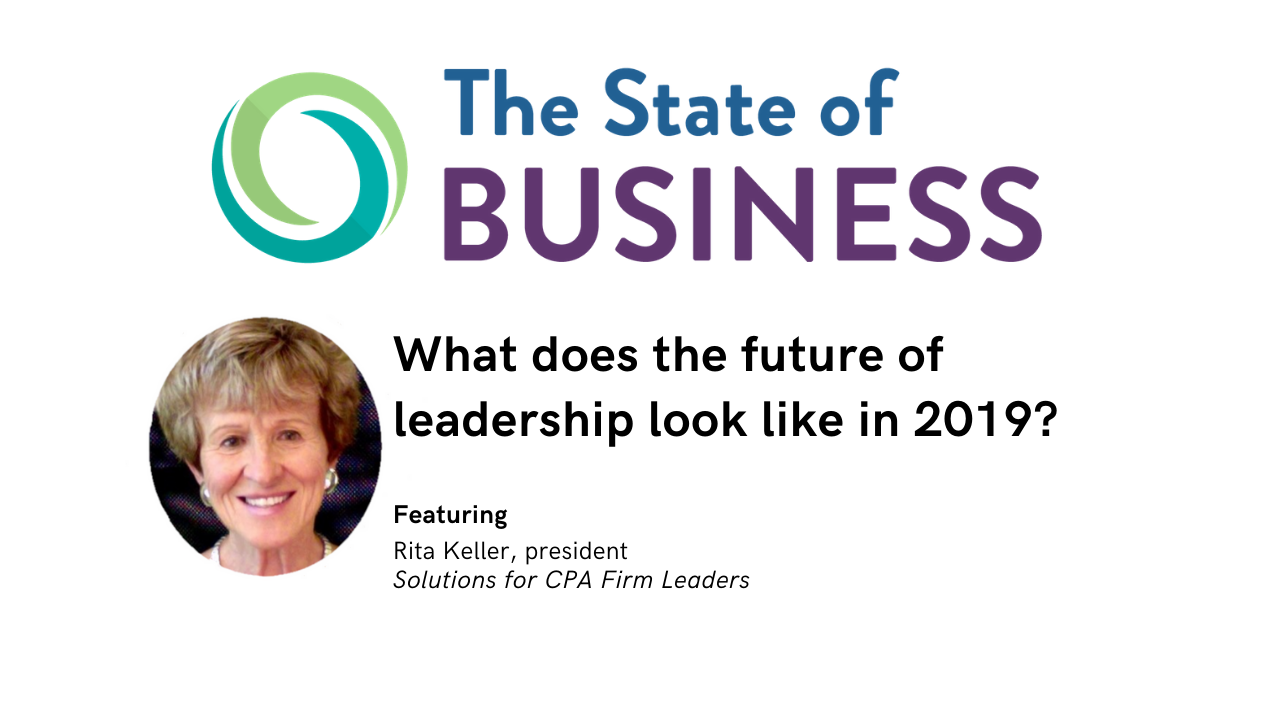 As the accounting profession evolves, leadership has to evolve along with it. We spoke with Rita Keller, respected CPA firm management consultant and author of the daily blog "Solutions for CPA Firm Leaders," on how leadership in accounting has changed over the years, the common leadership mistakes she’s seen, the one thing leaders aren’t doing enough and more.

0:01
OSCPA: Welcome to the State of Business with the Ohio Society of CPAs. I'm Jessica Salerno, Senior Content Manager at OSCPA and this is the show for CPA and accountants, where we cover the latest in technology, business development, career management, and more. In this episode, I spoke with Rita Keller, a respected voice in CPA firm management for more than 30 years, she has been repeatedly named on the top 100 Most Influential People in accounting by accounting today, along with one of the most powerful women in accounting by CPA practice advisor. You've probably visited or read her blog Solutions for CPA Firm Leaders to read about the latest in the profession, all from the possibility of a four day workweek, to changes to the CPA exam. In this episode, Rita and I discussed how leadership is evolving in the profession, the leaders of 10 years ago are not the same ones that are needed today. So what does that mean for the future? We dive into that and more.

1:01
RITA KELLER: Well, today, it has become much more of a flexible leadership style. You know, I think that word flexibility, we've heard it over and over and over again, in the CPA profession. It's what, you know, it came upward from young people, we had this view that they didn't want to work very hard. And they were, you know, not in comparison to the baby boomers who are slowly making their exit. But they really do. I mean, I think millennials want to work hard, even Gen Z coming into the picture. Now, they just want to do it differently. So if they want flexibility, that's called I think, leaders and firms to actually become more flexible themselves. And I see that all the time. And in fact, I think sometimes, leaders almost go too far with trying to please their people. So that is a big change. Over the 30 years, I've been working in the profession from the old standard, the boss says this, and you do it, you know, in the early days, and then it slowly began to change where you had more voice lyst, you know, leaders would listen to their people. And now because of the talent shortage, I'm saying, leaders and firms almost afraid to say something to anybody, even when they're not meeting their expectations. So the biggest change I see is that flexibility on the side of leaders, and with a small warning is, you know, you're still running a business.
2:37
OSCPA: What advice would you give to leaders who are trying to walk that line to make sure that they're having good policies and practices in place and leading their people well, but also, like you mentioned, retention is a huge issue, so they have to be flexible, how, what advice would you give to people about that?
2:59
RK: I think Jessica, what I would tell them is, it is you know, it's a balancing act, you know, you have to workers look to their leaders as sort of certain parents, you know, and I hear that from school teachers to, you know, things they should have learned at home, we have to teach them in school. And so the things they should have learned in school, we have to teach them in the workplace. Now, you know, so it's, it's a balancing act of bringing some guidelines and expectations into the workplace. But the biggest issue I see is communicating those things, the processes, the procedures, the it's more transparency, you know, the young people, the workers in a CPA firm or an accounting department, they want to know, what do you expect of me. And sometimes the leaders don't really, clearly communicate that. When I work with CPA firms. Most of the issues I face, no matter what, who's talking to me on the phone, they'll call me and say we've got this issue. I can, no matter what the issue, you can go back to communication and CPA firms. It's somebody dropped the communication bottle. So I would advise leaders to communicate, communicate, communicate, and ask your people for the feedback. And you don't have to, it's not like you have to change the whole firm, because you get some feedback, you thank them for their feedback. And you do take action on what you can some action. But again, it's making them feel more included. And in the loop in the communication. I think that sometimes owners just kind of forget about that, you know, in the partner meeting, we talk and talk about this. And maybe we talk about it with our firm managers, or the managers of our accounting, department, whatever area, and then we'll forget about those entry level people. And those two or three or four year people we think everybody knows, but sometimes they don't know. And I think they want to know, they care about what where is the firm going, what are we doing? Why are we changing to this niche and dropping that niche. So the more you can communicate, that's my biggest piece of advice for leaders right now.

5:21
OSCPA: Rita and I also discuss the importance of the senior level communicating with the younger staff to understand who truly wants to be a leader. She said, it's not appropriate anymore to assume that every person has leadership goals in mind. People's definition of success and the things that are meaningful, and that they're interested in achieving aren't maybe what they were, like 20 years ago.

11:54
OSCPA: So earlier, you mentioned recognizing those skills and how some people are showing them immediately and other that it takes a little longer for those to develop. Can you talk more about leadership being a skill, because I think sometimes some people assume it's like, oh, you're a leader, or you're not. And that's something that you're born with?

12:17
RK: I think it's something that you learn. Definitely. And I think that I've heard this for years from accounting firms, when somebody new comes in new to you, you can go where you want here, you know, you can grow, if you do good, you'll move up the ladder, you can be on the partner track. And, you know, all of these fancy words, and that really, are they true? Can every person that comes in the door be a partner someday? Now that wouldn't be realistic. You know, I don't think they- I like to see firms have partner-in-training programs, something documented, that tells young people when they come in the door, this is what it takes to eventually become a partner. And now that window has shortened I think people make partner a lot quicker than they did 20 years ago. But it's still how long does it take? What do I have to do it, and many people have written about it, that young people want to know their career path, when they come in the door. Accounting firms traditionally have not been very good at painting that picture of what it's like to come in and grow and make it up the partner track. So it's not telling everyone you can be a leader here someday.
I think that's telling people something that's false. You know, so I, I hope that firms now I don't know for sure, but I hope that firms have kind of let up on that a little bit. You want to encourage them. But again, it's it's trying to talk with them, mentor them, and figure out which ones really do have the potential and the desire. You know, you have to have the passion to it's a tough profession. Right, you know, and it's, there's no hiding from that. But it's a wonderful place to build your career. Because if you really want to build the career and, and be very successful, you can do it in public accounting. And even with the changes coming down the road, and today, you know, it's just everybody's talking about change and change. It's still a an honorable profession that's going to be around if you can make your mark.
14:33
OSCPA: Rita emphasized the importance of mentoring future leaders, finding those who aspire to leadership and teaching them as a crucial part of the pipeline. I also asked her how she's seen leadership changing in recent years.
14:46
RK: More women, more women. I and you've probably heard it good, too. I need more and more managing partners, owners of CPA firms, better women than I used to ever in the past. And I think that's going to continue. The profession is made up largely of women. I know the accounting graduates, the bigger percentage are women. It has been for years. I think women are finally making it through that glass ceiling and becoming leaders in firms. Well, I, I would just like to encourage the current leaders of firms to work on their transition plan, you know, project when, when we're when are the partners retiring? What are you going to do that work on how the firm will transition in the future and how you will personally transition? And is it going to be an internal you know, it's succession planning, it's what it really is. But start start now as a leader, mentoring young people so that you have a choice. So many firms don't have a choice they have to merge up. And the firms that are required, are becoming more picky is for lack of a better word they on who they acquire. So, work on your plan now, who the next leaders are going to be, how you're going to transition ownership sooner rather than later.
16:18
OSCPA: Thank you to Rita for telling us more about how she's seen leadership change over the years and what the future of leadership looks like for the profession. As always remember to follow us on social media and tell us what you thought of this episode. And if you have a topic you'd like us to cover next, you can get in touch with me at j Salerno JSALERNO at Ohio CPA. com, or find us at one of our social channels in the show notes. Thanks for listening!