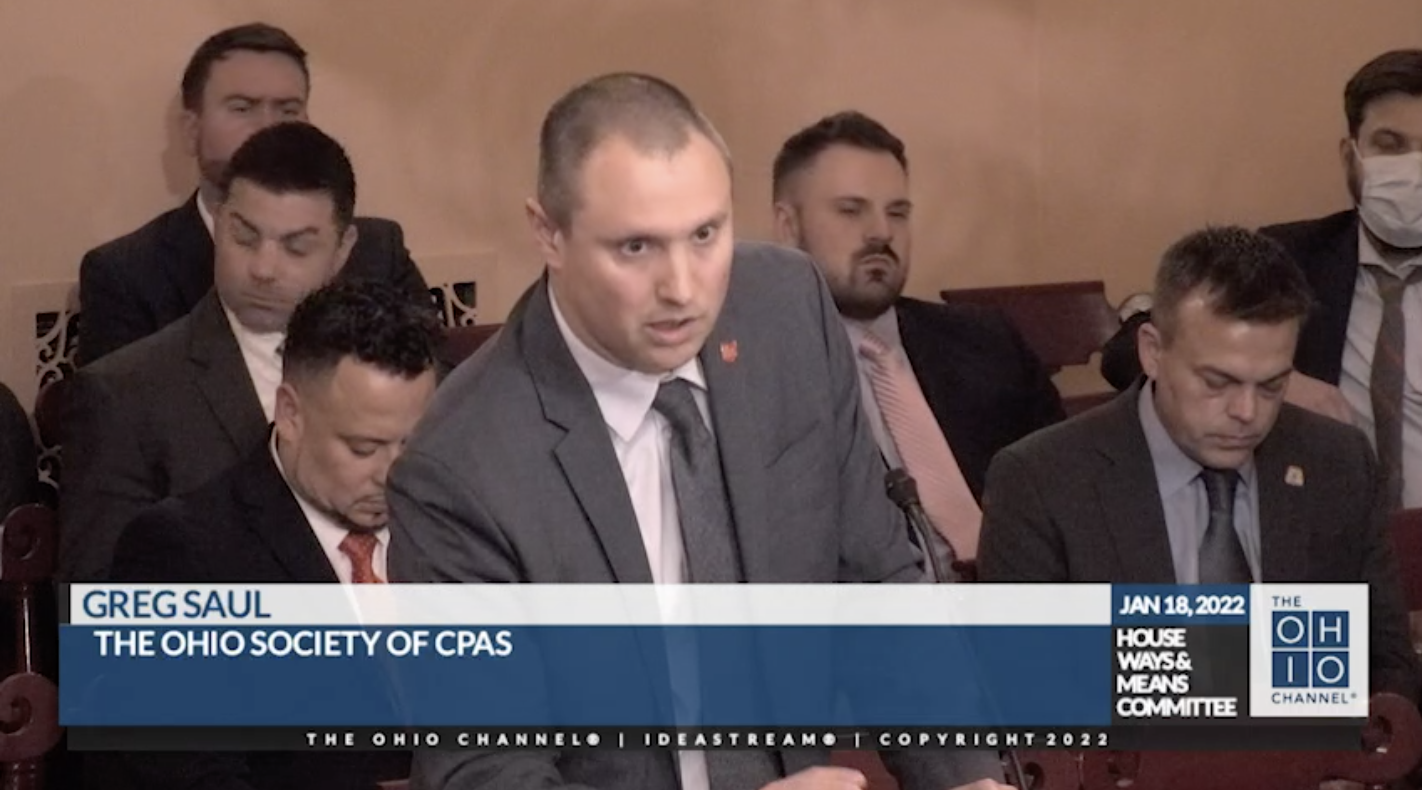 “OSCPA has a longstanding position that the CAT is effective if the following criteria remain intact: the rate is low, the base is broad, the exemptions are few, and compliance is simple,” Saul said during interested party testimony Jan. 18 before the House Ways & Means Committee.

The CAT was implemented in 2005 to replace both Ohio’s tangible personal property (TPP) tax and corporation franchise tax (CFT). Lawmakers are considering House Bill 234, which would phase out the commercial activity tax over five years.  The bill does not propose a replacement.

Saul reminded committee members that OSCPA’s 2016 Ohio Tax Reform Task Force report (see pages 17-21) discussed how the tax can be effective, along with making nine recommendations to improve it.

“The primary benefit of Ohio’s approach is the uniform, low rate of 0.26%,” Saul said. “The main concern by some with the CAT has always been its pyramiding effect. However, the low rate mitigates the concern about pyramiding. The higher the rate, the more dramatic the problem would become with the CAT’s pyramiding structure.”

“One of the CAT’s benefits is that it does not stand in the way of someone investing in Ohio; no one is penalized for investing in equipment or employees. This is not the case in many other states or under Ohio’s prior tax system.”

When the CAT replaced the CFT and TPP, it was imposed on pass-through entities (PTEs), which was a “new” tax on these generally smaller businesses that already pay Ohio’s income tax (not imposed on C corporations). Ohio has gone a long way to bring parity to this issue by lowering the income tax on business income via the business income deduction (BID) and 3% flat tax rate.

While fielding several questions from committee members, Saul told Rep. Mark Fraizer, R-Newark, that the CAT’s flat $150 annual minimum tax for businesses with gross receipts between $150,000 and $1 million probably isn’t a problem for small businesses. He added that if the CAT were to go away, that would eat away at the justification for the small business income tax deduction. The BID has been a priority for many OSCPA members since its enactment in 2013.

“Would the small business income tax deduction be in the crosshairs? We don’t want to go down that road,” he said.

He told Rep. Bill Roemer, R-Richfield, that he receives far more complaints from business owners about the municipal income tax than the CAT.

Read Saul’s testimony in its entirety.