Gov. Mike DeWine on Nov. 20 signed Senate Bill 258, which sets congressional boundaries for Ohio's 15 congressional districts for the next four years, though some groups have suggested they will challenge the map in court. 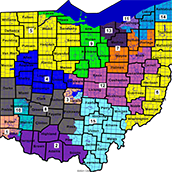 The new map was introduced Nov. 15 by Senate Republicans, and quickly moved through the Senate and House over the week despite the objections of legislative Democrats and voting rights groups. The General Assembly had until Nov. 30, to adopt a new map.

DeWine, who previously suggested maps first introduced by each of the legislative caucuses would not pass constitutional muster, said on Saturday in a written statement that he thought the latest version of Senate Bill 258 was the best offered by any of them.

“When compared to the other proposals offered from House and Senate caucuses, both Republican and Democrat, the map in S.B. 258 makes the most progress to produce a fair, compact, and competitive map," the governor said in the release. "The S.B. 258 map has fewer county splits and city splits than these recent proposals and the current congressional map. The S.B. 258 map keeps Lucas and Stark counties, as well as the Mahoning Valley, whole within single congressional districts for the first time in decades, and also keeps the cities of Akron, Canton, Cincinnati, Cleveland, Dayton, and Toledo all whole within the same congressional map for the first time since the 1840s. With seven competitive congressional districts in the S.B. 258 map, this map significantly increases the number of competitive districts versus the current map.”

COVID-19 led to a significant delay in population data from the U.S. Census Bureau, impeding the ability of policymakers to complete the maps sooner. Pre-pandemic, that data would have been provided several months earlier, permitting those charged with map drawing to have adequate time to meet key deadlines.

While Republicans said the new map will be more competitive than any other map proposed and keeps most of Ohio's largest cities whole within districts, Democrats and some groups argued that it overwhelmingly favors Republicans, who would be expected to win 12-13 seats. Under Ohio's current map, Republicans hold a 12-4 advantage. Ohio is losing one congressional district after next year because it did not grow as fast as other areas of the nation.

"You could argue that one or more of the Leans R seats could/should be toss-ups, but I don't think they are under anticipated 2022 conditions. We'll see what the Ohio Supreme Court says," Kondik wrote.