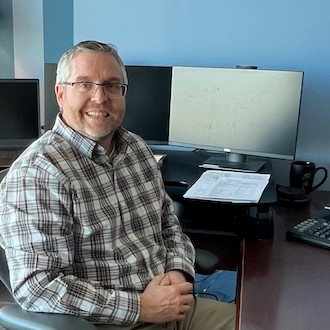 “Our number one asset is our people,” said Keith Arner, CPA, managing partner. “And if they feel they can be more efficient working from home or gain that one extra hour from not commuting then we encourage them to do that.”

Hall, Kistler & Company moved offices last year in August after coming to the end of 20-year lease on their previous building. Arner said the old space made sense when they needed to store large amounts of paper and have bigger desks, but that no longer fit the more mobile workplace of today.

When the pandemic hit, Jolene Colant, director of marketing, said the firm already had systems in place that made working from home possible, they just needed to finetune some of their procedures. The firm eventually sent out a staff survey asking questions about their preference on flexible workspaces in the long term.

The survey revealed a strong mix of those who preferred to work completely remote, only in the office or split between the office and remote. Arner said they needed an office that allowed people to have private meetings when necessary, spaces to collaborate openly and move furniture around easily. They set up hoteling spaces, where desks are available to whoever is in the office that day and they also updated their phone systems. 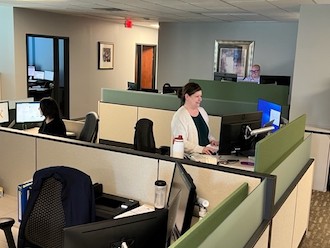 “It's been received fairly well from our clients,” Arner said. “And staff morale has been good. With the winter weather we've not skipped a beat on days that we closed the physical office, and staff really appreciate not having to venture out in the snow. We don't lose any time working and that's enhanced our efficiency.”

Arner said transitioning to a new working model does mean culture can be impacted, and the firm has made a priority to hold events where staff still has a chance to get together and celebrate milestones and achievements, along with more informal touches such as sending UberEats gift cards as a lunch treat.

“The things that we're doing now will lend itself to the future,” Colant said. “This all allows for fluidity, no matter how many staff we have in as long as people are in agreement to the hybrid model.”