Two of the Society’s top legislative priorities cleared the Ohio legislature on the same day, and now only await Governor DeWine’s signatures for enactment.  In marathon sessions on Wednesday that stretched well into the late evening, both the Ohio House and Senate passed numerous bills prior to adjourning until after the August 2 primary election. 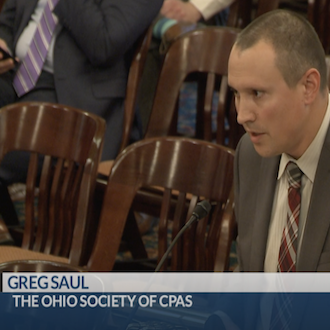 “We really pushed hard to get these two priorities finished before the legislature took a break to campaign for their primaries, said Greg Saul, Esq., CAE, OSCPA Director of Tax Policy. “Otherwise, we would have been looking at September as the next opportunity to get these two bills enacted.”

S.B. 246, known as the SALT cap parity bill, would authorize a pass-through entity (PTE) owner to claim a refundable credit against the owner’s Ohio income tax liability equal to the owner’s proportionate share of the tax paid by the PTE.  IRS Notice 2020-75 is what allowed states to enact legislation to clarify that taxes paid by a PTE do not count towards an owner’s $10,000 state and local tax limitation deduction for federal income tax purposes.

With Missouri also recently passing their SALT legislation, Ohio and Missouri will become the 28th and 29th states to address this issue. See the map of states with pending or enacted legislation.

H.B. 515 clarifies that gains from the sale of an ownership interest in a business is considered “business income” for Ohio income tax purposes, and thus eligible for the BID. The sale must satisfy either of the following: (1) the sale is treated for federal income tax purposes as the sale of assets – i.e. 338(h)(10); or, (2) the seller was involved in the day-to-day management (material participation) of the business during the taxable year in which the sale occurred or during any of the five preceding years.

Please stay tuned to OSCPA news for when Governor DeWine signs both bills.