One OSCPA student ambassador attributes her passion for accounting to the teachers and peers who helped to guide her during her academic journey. 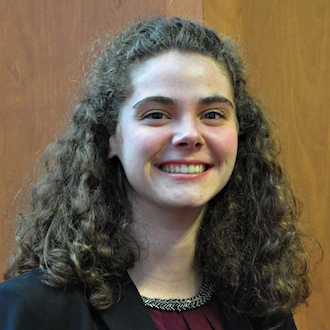 “The people I’ve met and learned from, there’s a bond that’s created,” said Caroline Brinko,  a senior at The Ohio State University majoring in accounting with a minor in business analytics.

Originally from Cleveland, she went to OSU to major in finance. However, it was during her sophomore year that an accounting class sparked her interest.

Sharing long conversations during class eventually led Brinko to ask her professor’s thoughts about changing her major to accounting.

She said her professor’s advice made an impression.

“I remember her saying, ‘You can get the knowledge, but if you don’t have the passion, then accounting isn’t for you… And I think you are passionate about it,’” Brinko said.

With her professor’s support and willingness to help her learn, Brinko said she felt  certain that accounting really was for her.

Today, Brinko aims to encourage her peers in the  same way. Being “two sides of the same coin,” her roles as a Student Ambassador and teaching assistant work well together. Each one maintains the same goal: to teach and encourage others to learn more about the accounting world.

“That’s something I’m passionate about: I love helping people,” Brinko said. “Talking about accounting and teaching. Both roles have been rewarding for me.”

Helping people in the same way Dr. Sletton did for her, Brinko has found opportunities from the relationships she’s made with her professors and peers.

She has had internships with Ernst Young and Third Federal Bank. She also had the opportunity to be one of the two ambassadors who testified in the Ohio Senate in changing the hours requirement to sit for the CPA Exam from 150 hours to 120. After graduation she will work at Ernst & Young in the fall.