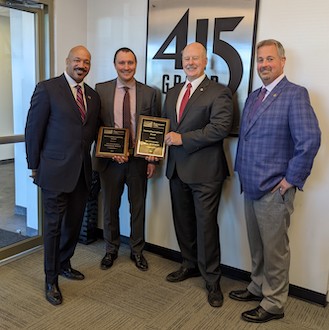 The Ohio Society of CPAs was pleased to recognize Rep. Thomas West, D-Canton, and Rep. Bill Roemer, CPA, R-Richfield, with OSCPA Outstanding Legislator Awards on Nov. 8. The award presentation was hosted in Canton by managing partner Rich Craig and other members of 415 Group. OSCPA periodically awards legislators who are critical to our success on key OSCPA issues of concern, who regularly work closely with OSCPA to help move our profession’s priorities forward, and who merit special recognition for their significant efforts and involvement on behalf of the CPA profession and Ohio.

Both West and Roemer have been reliable advocates for the profession, and they also have previously spoken to members about our advocacy efforts at OSCPA’s virtual Town Hall Series. They have been instrumental on several OSCPA priorities.  Just a couple of examples include:

Reps. Roemer and West first teamed together during the 133rd General Assembly to get House Bill 442 adopted last year to permit candidates to start the CPA exam process when they reach at least 120 of the needed 150 semester hours of education.  A recent ABO rule, which became effective Oct. 20, will further allow students to start taking one or more parts of the exam after finishing at least 24 of the required 30 accounting hours and 24 business hours. All 150 semester hours, including all 30 accounting hours, still must be completed for licensure.

The two legislators are also the primary sponsors of House Bill 45, which would establish a two-month “amnesty” period during which taxpayers owing past-due state taxes and certain fees may discharge the debt by paying the delinquent tax or fee without having to pay the penalty and accrued interest normally due. The most recent general tax amnesty was previously conducted in 2018. The current proposed dates for the amnesty period are July 1 – August 31, 2022. H.B. 45 had its third hearing before the House Ways & Means Committee on Nov. 9.

Rep. Roemer and Rep. West are two of just four legislators OSCPA is recognizing this year with our 2021 Outstanding Legislator Award, along with Rep. Derek Merrin, R-Monclova Township, and Sen. Kristina Roegner, R-Hudson.