The Ohio Society of CPAs periodically awards legislators who are critical to our success on key OSCPA issues of concern, who regularly work closely with OSCPA to help move our profession’s priorities forward, and who merit special recognition for their efforts and involvement. 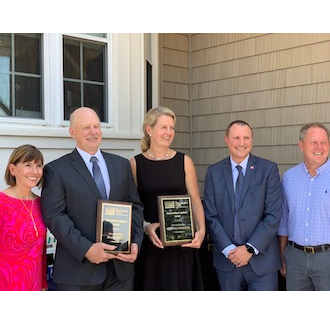 The Ohio Society on Aug. 20 presented awards in Summit County to two of the recipients, joining Jim Schulte, CPA, and other members of Schulte & Company CPAs in Fairlawn. Sen. Roegner and Rep. Roemer should be familiar to those members who have been regularly attending our virtual Town Hall Series, as they were both well-received past speakers of the event.

Upon receiving the award, Senator Roegner said “I’m honored to receive the Outstanding Legislator Award from The Ohio Society of CPAs. A tireless advocate for common sense reforms, it is always a pleasure to work alongside them on issues important to Ohioans and Ohio businesses.”

Rep. Roemer, who is the only CPA currently serving as an Ohio legislator, commented, “I was honored to be recognized as a Legislator of the Year along with my friend Senator Kristina Roegner. Thanks to Jim Schulte, CPA for hosting us and Barb Benton and Greg Saul of the OSCPA for presenting the awards.”

Below are just some of the significant achievements highlighted at the event:

To learn more about the power of involvement in the legislative process, join us Dec. 3 for Advocacy in Action.