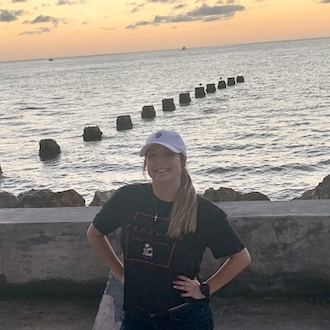 Do you have any mentors who have helped you get to where you wanted to be in life?

Yes, I have a mentor who is actually my professor in college. His name is Dr. Schaffer. He pushed me to be where I am, because I came from a smaller school at Youngstown State, so Big Fours don't recruit as often from here. And I had an aspiration that I wanted to work in a Big Four. But I thought they don't recruit for my school, only standard regional firms do, and he pushed me in this direction. So I feel like without him, I wouldn't be where I am today.

And if you weren't in accounting, what do you think you would be doing instead?

It's actually funny, because I've switched my major four times since I started college. I originally wanted to study animal behavior, like wildlife and marine life specifically. I just really like marine life. I've liked it ever since I was super little. And I always told myself, "You're going to be a marine biologist." And then I started that when I started college, and I realized it wasn't for me. So I ended up in accounting instead and it's worked out.