Ohio lawmakers heard testimony Feb. 2 on emergency legislation championed by The Ohio Society of CPAs that would – among other things – ensure that expenses paid with forgiven Paycheck Protection Plan loans become deductible for state income tax purposes. OSCPA has taken the lead on this issue and was the only business group asked to testify at the hearing. 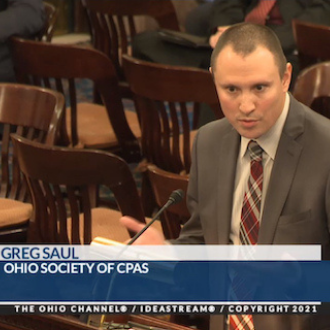 OSCPA Tax Policy Director Greg Saul, Esq., CAE, testified in favor of S.B. 18 before the Ohio Senate Ways & Means Committee and said the legislation deals with many federal tax provisions that were recently enacted as part of the Dec. 27 Consolidated Appropriations Act (H.R. 133). (View the testimony.)

Because the bill is emergency legislation, it would be enacted immediately upon the Governor’s signature instead of the normal effective date 90 days later. A companion bill is expected to be introduced soon in the Ohio House.

In a separate issue, Saul said OSCPA is still working on a legislative fix to ensure that Ohio Bureau of Workers’ Compensation refund payments are not subject to the CAT.

Act TODAY to help struggling Ohio businesses by keeping Paycheck Protection Program forgiven loans deductible at the state level! Without this proposed legislation that will conform Ohio tax laws to those adopted by Congress in December 2020, impacted businesses will face a surprise state tax bill when they can least afford it. Use OSCPA’s fast and easy letter-writing program to send your message to your state elected officials in less than five minutes.

For the latest on the recent stimulus bill provisions, CLICK HERE to view our course offerings.