CPA love story: A decade in the making

In honor of Valentine’s Day, we’re highlighting Ohio accounting couples the month of February. Find out how they met, their first impressions and how accounting factors into their love story.

When Steve Wenzlick, CPA began working at Tebay Mosley Associates in 2000, a  firm in Northwest Ohio, neither he nor his colleague  Rebekah Smith, CPA, considered dating each other. 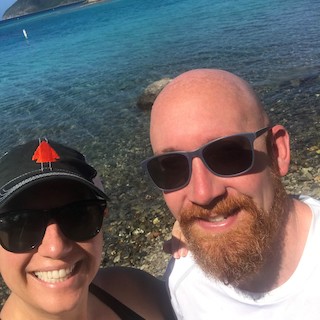 “I am older than him by about four years, and I had been working four years when he started,” Smith said. “What do you think about any new staff person that starts working for you?” she laughed. “Personally, I thought he was a great guy – a good, decent, fun person.”

Wenzlick said the two had a professional, mentor and mentee relationship when they worked together.

“For me it was more of a respect thing,” he said. “That first relationship being more of a professional versus personal relationship.”

Eventually, the two embarked on separate career paths but stayed in touch. Rebekah moved to Columbus to work as the director of forensic and dispute advisory services at GBQ, and Steve started his own company, Draft Financial, where he uses his accounting skills to assist the craft beer industry.

In 2009, the duo reconnected at a conference in Washington, D.C. and began dating for about a year and a half before getting married in Nov. 2010.

“We had known each other for 10 years as friends and colleagues before we started dating,” Rebekah said. “Which was such a great foundation because we sort of spoke the same language and had seen each other in a setting where neither of us were trying to impress or date the other person.”

In their free time, Rebekah and Steve are connoisseurs of craft beer, and like to explore breweries in different cities. They also enjoy traveling, relaxing at their lake house at Indian Lake, watching the Cubs and spending time with their two dogs Wrigley and Ernie.

While neither of the two ever thought about marrying another CPA, they both said they are glad they married someone who understands the specifics of their job, especially this past year.

“It’s been nice to be married to another CPA,” Rebekah said. “In this last year we both got wrapped up in the PPP so we did find ourselves talking technical more than we normally do.”